While the visual updates to the new XL6 are very mild, the mechanical changes and feature additions are quite significant.

Using a slightly harder edged and upright style, a 6-seat configuration with captain’s seats in the middle row, black cladding all around and blacked out interiors, the XL6 is the Ertiga’s premium avatar. However, now that the MPV space has seen the addition of the premium Kia Carens, Maruti has updated the XL6 with some mild styling changes, and also upped its game with some interesting feature additions, along with a new engine and a new 6-speed automatic gearbox. Does it pass muster?

Comparing the updated XL6 to the older version is a game of spot the difference. A closer look reveals the refreshed grille and a chunky chrome bar that joins the LED DRLs in the headlamps. Over to the side, the new XL6 now gets bigger 16-inch wheels that aren’t all-black like on the previous version, and instead it gets a metal finish with new styling. They fill the wheel arches better and sure help the car look a lot more proportionate this time round. The rugged-looking black cladding remains, along with the roof rails. At the rear, the tail-lamps carry over the same shape as before but get a smoked effect now. And lastly, there is a chrome bar on the boot lid as well. All in all, a rather minor change.

Stylistically speaking, it’s a similar story on the inside, as the changes are difficult to notice at first. The dashboard layout is the same as before, but what has changed is the faux wood panel design. The instrument cluster, steering wheel design, HVAC switchgear are all carried over from the previous version. That said, the steering now gets a handy mechanical improvement with a telescopic function, in addition to the tilt, which helps find a better driving position. 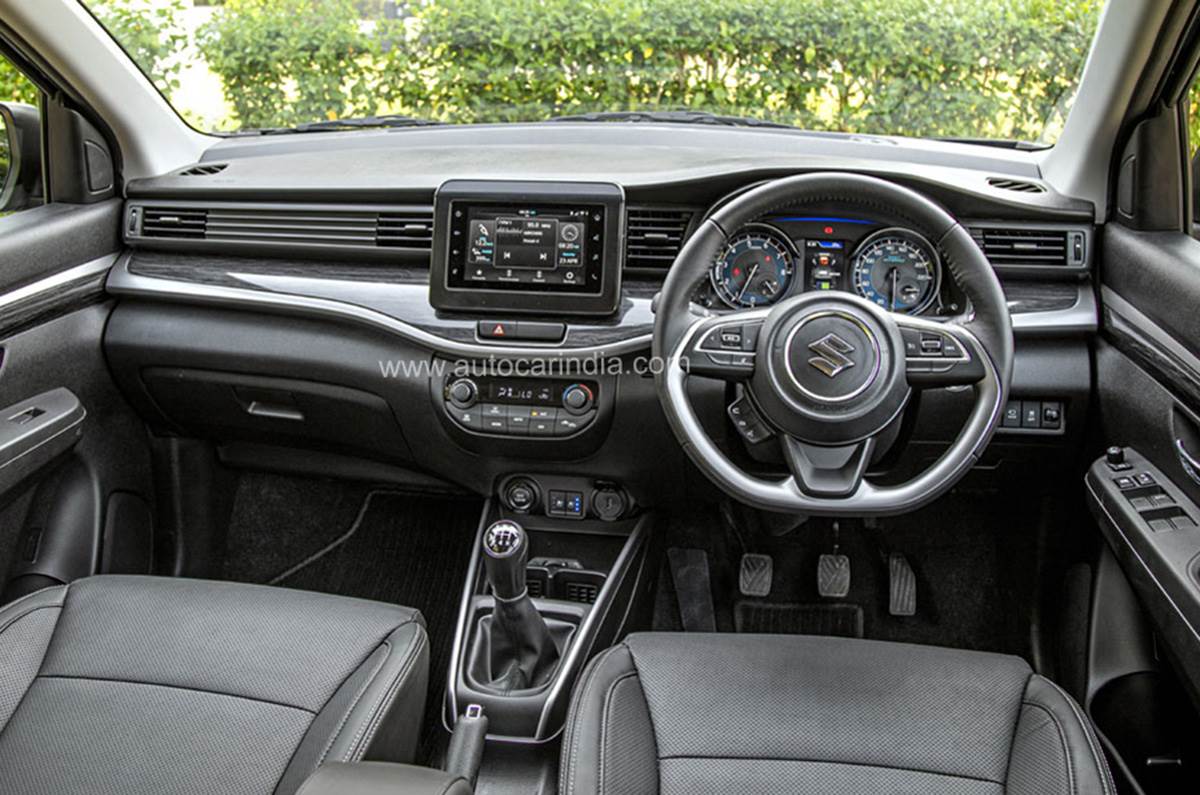 The 7.0-inch touchscreen too gets updated to the SmartPlay Pro UI, which gets more functionality and a refreshed UI. What is also new is the connectivity tech. The XL6 now gets Suzuki Connect App support, which opens up 40 new functions you can control from your smartphone, along with Amazon Alexa integration. Basically, you can ask the Alexa-based smart speaker in your home to precool your XL6 parked downstairs and it will do it for you, but this is only possible on the automatic gearbox version. You can also switch on the headlamps and hazard lights, and lock or unlock the car from the app itself. The other new bits are a TPMS (tyre pressure monitoring system) and a 360 degree camera, both of which are very handy. 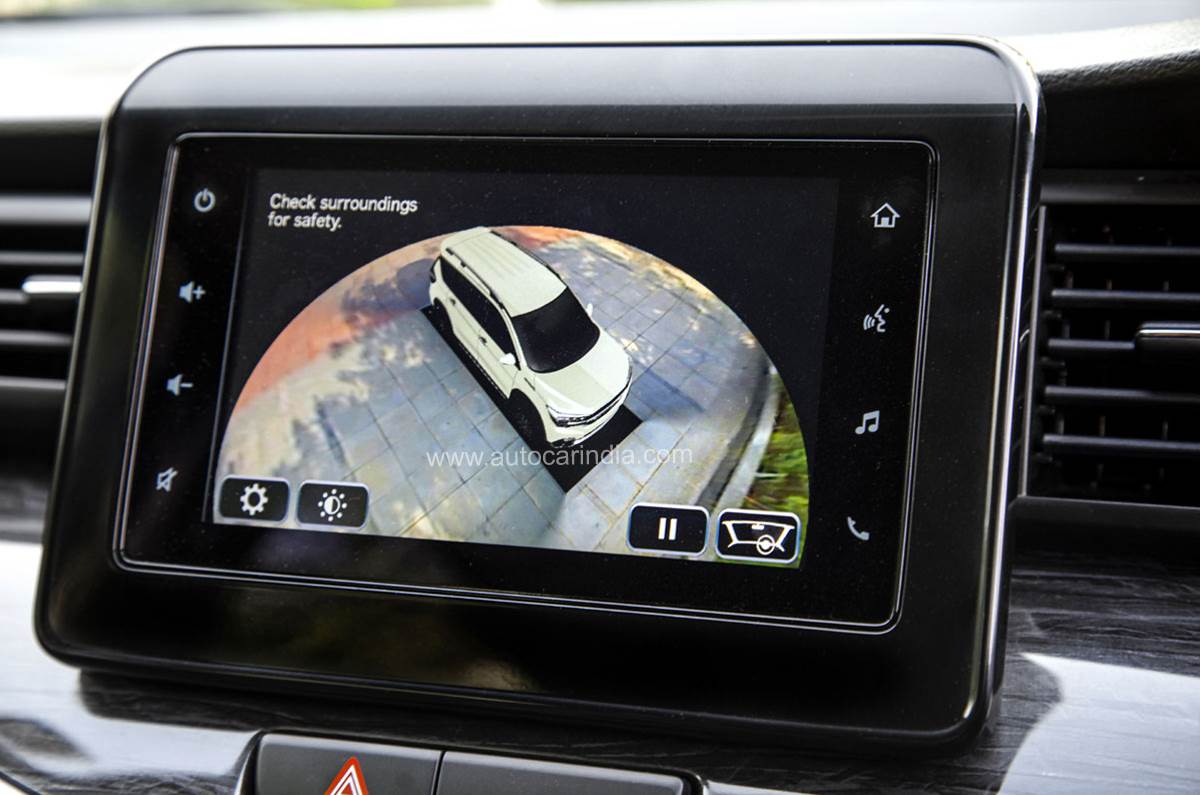 Lower down on the centre console are switches for yet another highlight of the updated XL6 – the ventilated seats. On the top-spec Alpha+ trim, you get perforated leatherette cooled seats, which work perfectly for our hot and humid climate. The interesting thing about the system, though, is that where conventionally ventilated seats work by blowing the air through the backrest and squab, on the XL6, it does the opposite. The system pulls in the ambient air on the seat surface, which has a distinctly quicker and better cooling effect. Another worthwhile update is the addition of blowers for the cupholders up front, to keep your beverage cool for longer. However, what isn’t appreciated is the lack of USB ports. Throughout the cabin, there is just a single port at the front, and given that this is a big family car, it is a rather strange oversight for an update that’s focused on new tech. 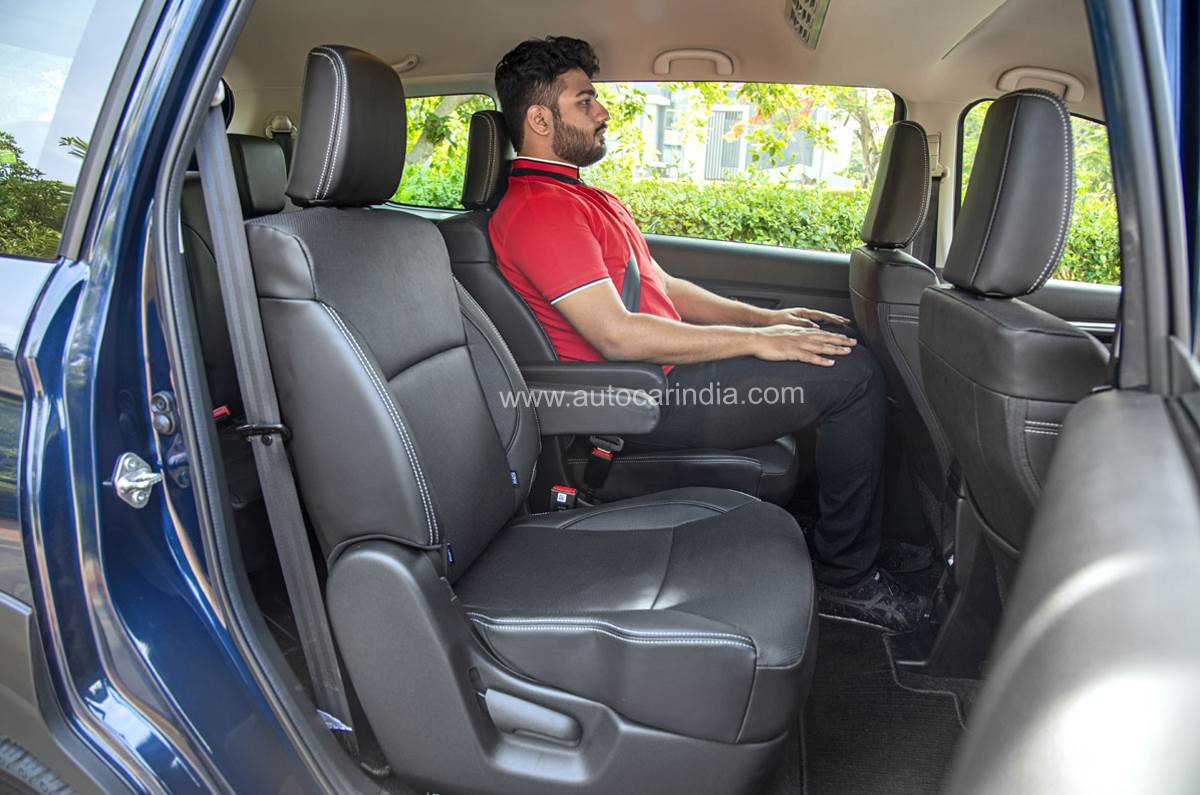 In the second row, you get roof-mounted AC vents as before, along with captain’s chairs and superbly large windows. Space is plenty, and there is enough legroom to stretch and a comfortable headroom. The captain’s seats are comfy, have the right amount of cushioning, and offer good flexibility, which also helps adjust space for third-row passengers. Speaking of which, the XL6 has a relatively easy ingress to the last row of seats, and once you get in them, there is not much to complain about. Sure, space isn’t like in the middle row, but with a little adjusting, even tall occupants can find reasonable space back here. The backrest can be reclined, but taller occupants will find their head grazing against the roof. 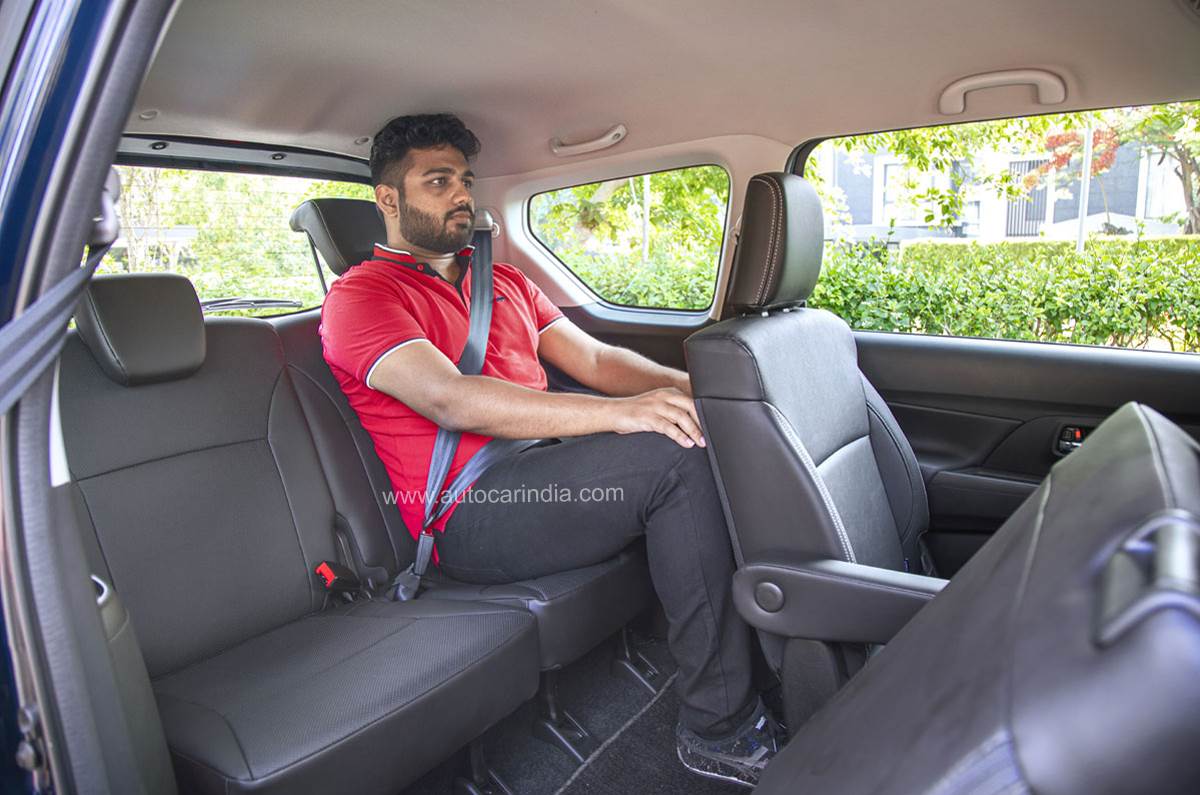 Sadly, there are no AC vents back here, and on a hot day, it can get a bit stuffy. Still, if you don’t wish to use those seats, you can fold them down and open up 550 litres of boot space. Maruti has also upped the XL6’s safety equipment, and while it has not been crash-tested, the new car now gets four airbags as standard across all variants, along with ABS with EBD, ESP and hill-hold assist. The addition of ESP will go a long way in improving active safety. 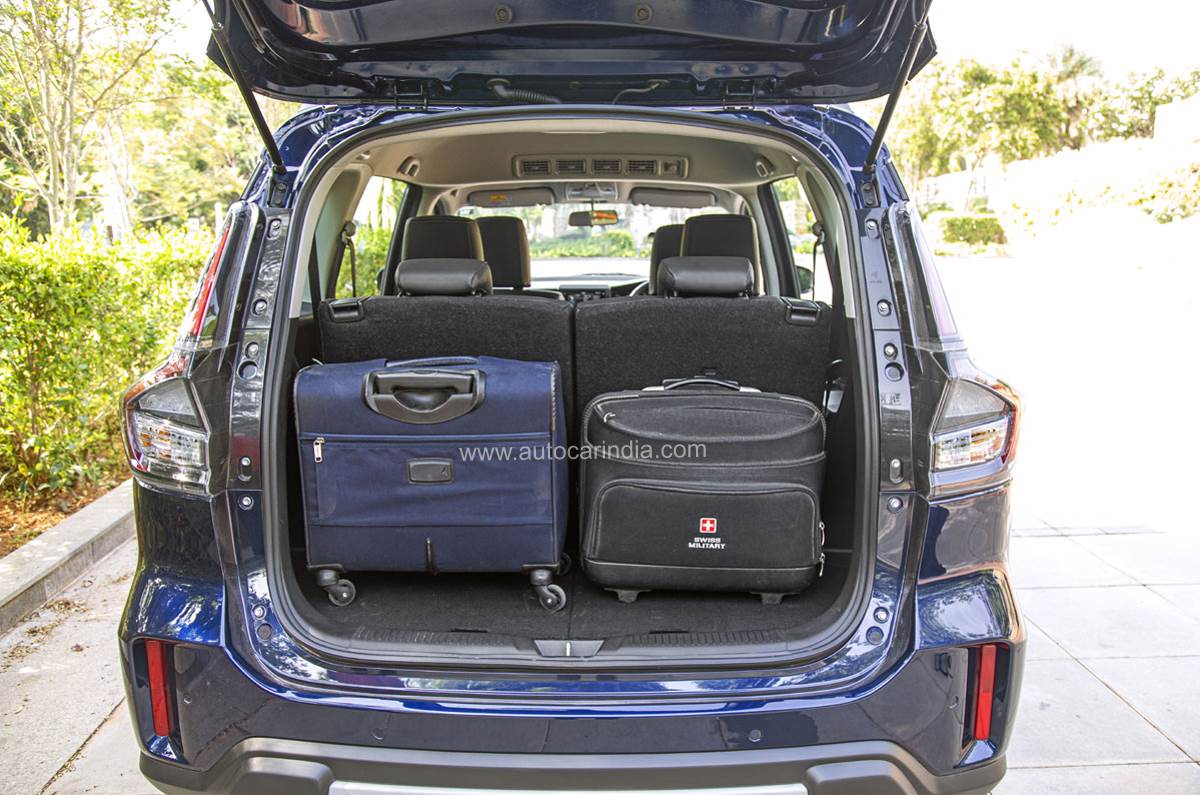 For the 2022 update, Maruti has swapped the older 1.5-litre K15B engine with a new K15C 1.5-litre DualJet petrol motor. It makes 103hp and 136Nm, which is 2hp and 2Nm down on the older car, respectively, but the addition of two injectors for each cylinder helps improve mileage; Maruti claims 20.97kpl,which is an improvement over the previous engine. It still is a mild-hybrid, where the start-stop system helps save fuel in traffic, and the motor offers some assistance under acceleration. The system is seamless, and while it does get a slight nudge when poked, the engine overall is relaxed and linear. Power delivery is smooth and off-the-line responses are expectedly laid back. Drive it with a sedate foot and all is fine. Refinement is good, there are no vibrations, and all in all, it’s a smooth driving experience. 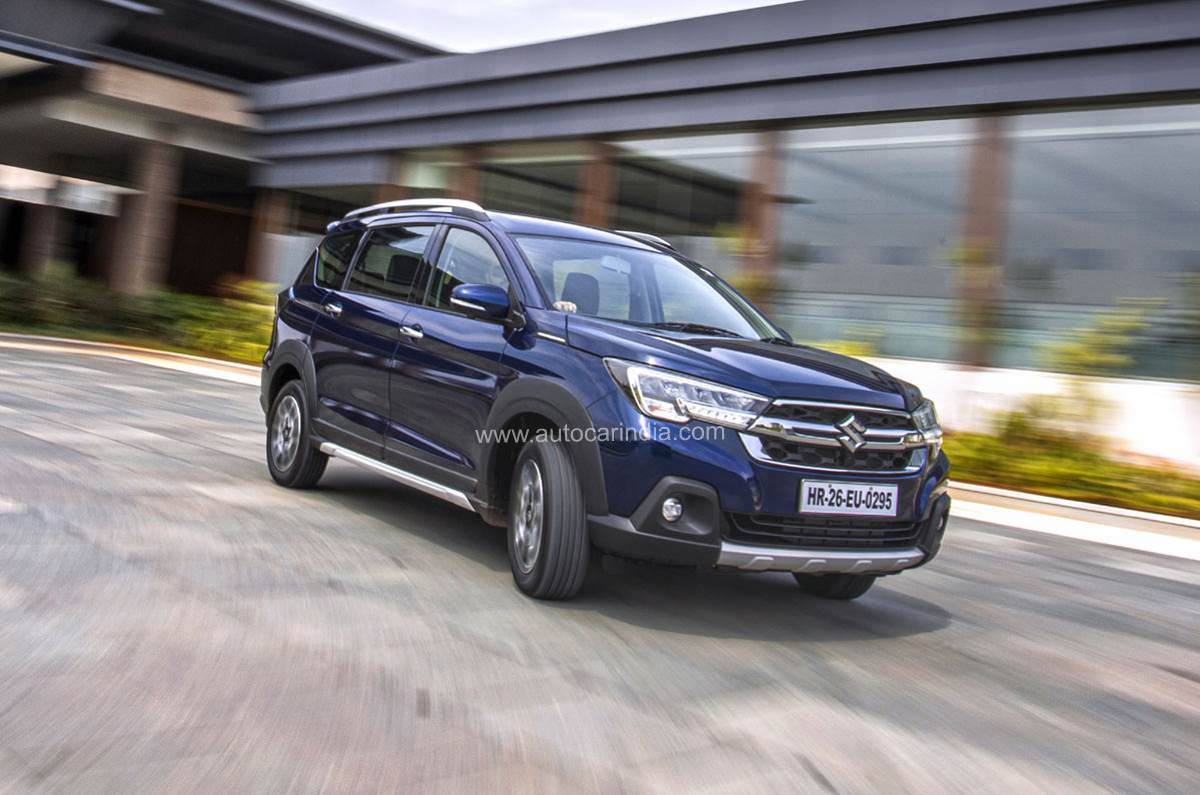 Now, it isn’t exciting or fun, as the 0-100kph time of over 15sec bears testament, but for an MPV, a calm and relaxed drive is what is expected. On the manual, the clutch is light and has a gradual bite point, and there is also a dead pedal that makes long drives comfortable. What is very impressive is how tractable the car is. The gears are well spaced out and you can come down to crawling speeds of as low as 7kph in second gear. This means speed bumps need not require you shuffling through first and second. The new 6-speed automatic, however, does give the engine a hard time, especially if you rush it. The upshifts are delayed, the downshifts take time and in no scenario does it like to be eager. In terms of kickdown, the new XL6 is over a second off the pace, compared to the previous version. A dash from 0-100kph is also a lot more linear, and with a full load, it will need to wring the engine, which gets boomy and rather vocal past 3,200rpm.

Ease your right foot though, and the auto’ box gets a lot more comfortable. At city speeds, the shifts are smooth, part-throttle responses are good, and when your left leg is resting comfortably, you won’t be bothered about its sluggish nature. What is a big plus is the availability of a manual mode with paddle shifters, which allows you to take total control of the gearbox. It is the ideal setting to have if you need faster responses. Just slot it in ‘M’ and take charge of the paddle shifters. Shifts are responsive and make the drive that much more engaging.

Now an engaging drive isn’t what you expect from an MPV designed to ferry six in comfort. However, for what it’s worth, the XL6 isn’t all too bad. Sure, there is body roll and it feels top heavy, but you never feel loss of control in the corners or any massive understeer. The steering has a hint of heft, which is unlike a Maruti, and overall, it is a reassuring handler. What was a slight worry initially was the ride quality as the 16-inch wheels now gets a smaller sidewall (195/60 compared to the earlier 185/65), which would usually rob some cushiness from the ride, but that isn’t the case. As for the ride, the spring rate for the suspension has been adjusted for the gain in wheel size and weight, so over a bad patch, it still is very much adept. Slow speed bumps are well taken care of and the sharp cuts are muted too. Some really sharp ones do make it through to the cabin, but the smaller aspect ratio of the tyres hasn’t impacted the overall ride quality. Stability too is impressive and with a full load, it only gets better. The XL6 has always been a comfy and spacious car, and it has certainly gotten more appealing with the new features and updates. The more efficient engine and the 6-speed auto will also no doubt add to its appeal, but with prices ranging from Rs 11.29 lakh to Rs 14.55 lakh, the XL6 has also gotten expensive, especially at the top. There’s also no diesel, unlike the Kia Carens, but a CNG is on its way. So, should you buy it over the Carens? While that’s something only a full-blown comparison can answer, but with the new features, connected tech and the refined powertrain on top of what is already a very spacious and comfortable car, the XL6 does plenty to make sure it’s a strong contender.